Algarve throughout the year

Almancil provides facilities and services typical of a thriving small town, including PO, banks, shops, chemists, restaurants, pubs, garden centres, auto repairs and so on. Large regional shopping centres are at Faro shopping along the N125 past the airport on the western suburb of Faro and Algarve Shopping west on the N125 located north west of Albufeira at Guia.. The centres are some 10km and 35km respectively from Vale dos Pinheiros. 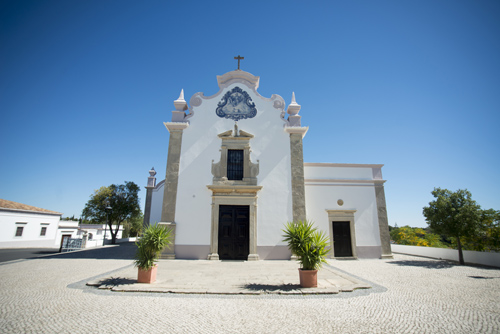 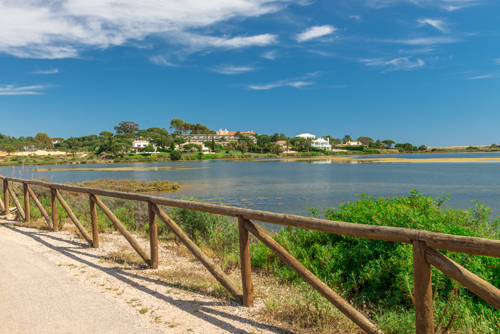 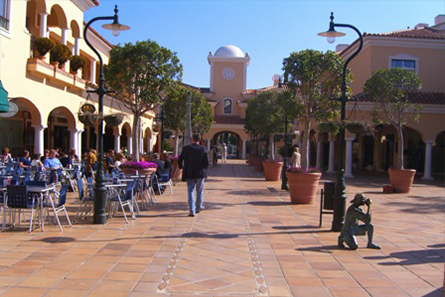 Markets take place at Quarteira every Wednesday and Loule on Saturdays. Food, clothes, leather goods and bric-a-brac abound in a typical Portuguese ambience which should not be missed. 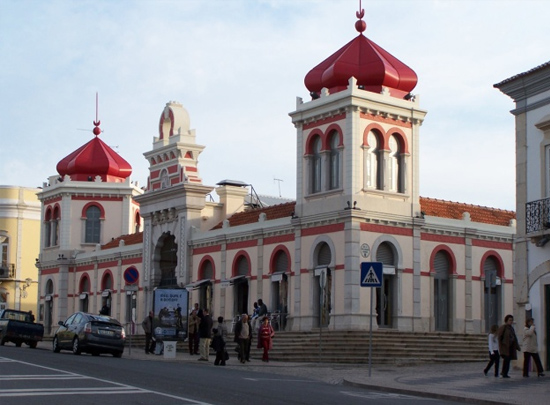 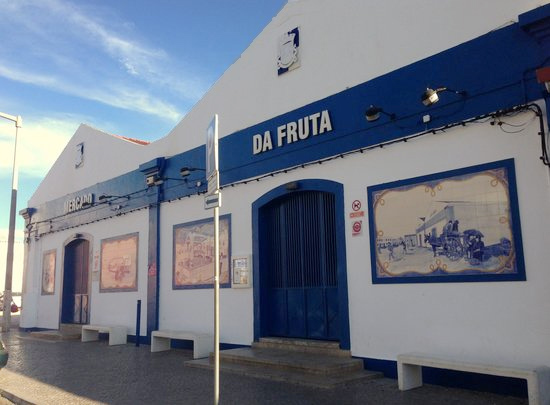 A range of championship-standard golf courses are located in the direction of Tavira (a splendid, historic town 50km to the east) and in the direction of Vilamoura and beyond to the west. The number, quality, variety and warm welcome of the courses will satisfy the appetite of all from the less frequent player to the fanatic. 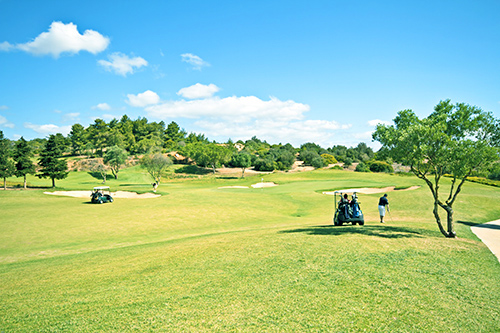 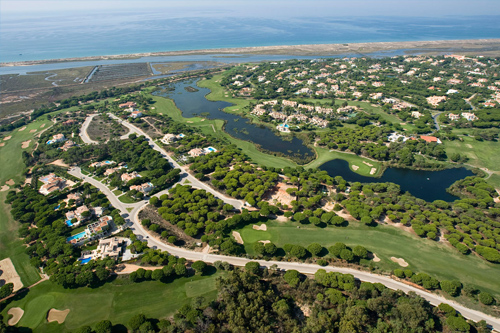 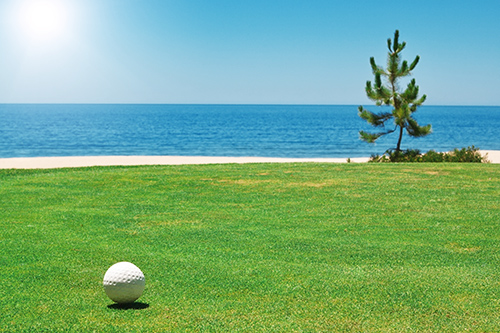 For cultural entertainment, the theatres at Loule and Faro offer national and international productions of high quality. The cinema at Faro (Forum Algarve Shopping) brings current and popular releases to the Algarve.

Portugal is a country of carnival and fiesta; the Algarve exudes this culture through a feast of events to satisfy all tastes throughout the year.

Early in the New Year

Celebrating the New Year can be enjoyed at many of the Algarve’s restaurants. Good food, fine wine and great hospitality will welcome in a memorable New Year.

The Sausage Festival (Festa da Chouriça) includes a procession, tastings of grilled sausages and plenty of musical entertainment at Querenca in early January. It is always good fun.

At the same time, Paderne hosts the annual Medieval Festival, transporting you back 500 years to the Middle Ages under the Moors. Jousting, sword fights, jesters, jugglers, musicians and belly dancers are interlaced with plenty of food and wineat the Medieval Market.

The Day of the Kings (Dia de Reis) marks the end of the New Year celebrations on 6 January in most towns. Sharing cake, ‘bolo rei’ is traditional on this day.

Towards the end of January, Pechão, near Olhão, hosts the Almond Blossom 5km walk and 10 km run to celebrate the arrival of almond blossom in the Algarve. All are welcome – the fast and the slow!

Carnival at its Best
Fiesta really starts to get underway in February withthe Loule Carnival (a la Rio de Janeiro). It is the oldest such event in the country and ranks as one of the biggest, brightest and boldest street parties in Portugal spread over three days. Processions of floats with theatrically dressed clowns, artistes anddancers mark an incomparable atmosphere, which continues with dancing until dawn. Sao Bras de Aportel and Quarteira have their own festive events. 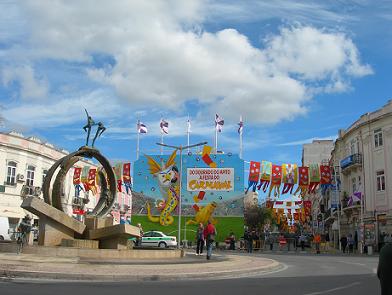 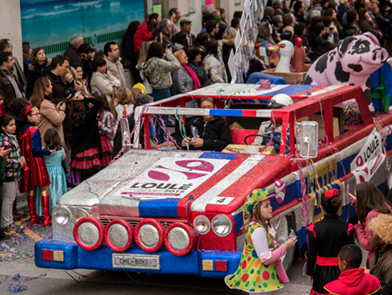 Albufeira in February brings a focus on food with its Soup Festival. Enthusiasts flock from far and wide to taste speciality soups in many of the local restaurants.

This gastronomic theme is carried through to May in the Algarve with local restaurants proudly serving a traditional regional dish.
Tavira’s riverfront provides a setting for the three-day gastronomy festival of the serra (Fiera da Serra) in March/April where countryside cuisine may be enjoyed among exhibitions of handicrafts with music and dance late into the evening.

The nearby town of Olhao in early April holds a Clam Festival (Vila das Ameijoas) with traditionally cooked clams ‘on the stone’ to savour as a real delicacy. Delicious. 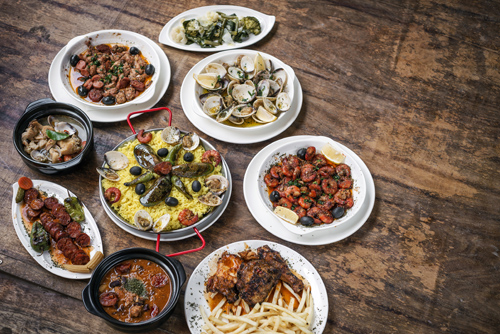 Easter marks the start of religious festivals. The Flower Torches Festival at Sao Bras de Alportel takes place on Easter Sunday. With the roads paved with flowers, ‘flower torches’ are carried in anunending procession as a celebration of the Resurrection. On the same day in Loule, the Algarve’s most important religious event is an emotional occasion. A 16th century statue of Mae Soberana (the Sovereign Mother) is carried into town from her hilltop shrine in a procession of solemnity and piety, to Loule’s parish church where she rests for two weeks. The return journey is ebullient with the tossing of flowers into the path of the cortege.

Towards Summer (May and June)

The longer, warmer days are ideal for a range of festivals as tourists start to arrive in numbers. The Pine Cone Festival (Festa da Pinha) at Estoi in early May is a centuries old tradition to welcome Spring in the biggest village in the Algarve. Cultural events and a fair of rural produce can be enjoyed by all.

Salir, a village in the hills of Loule, is decorated in early May to celebrate the arrival of Spring with a procession to represent the ancient tradition of collecting maize cobs. Handicrafts and tastings of the produce of the ‘serra’ are a major colourful and picturesque attraction at this Festa da Espiga, part of commemorating Loule’s Municipal Day.

The Algarve Music Festival is in full swing in May and June at Faro, Lagos and Portimao. A variety of concerts in churches and theatres attract many local people and tourists.

From May to October, there is a Sand Sculpture Festival at Pera (N125 north west Albufeira). It isone of the largest events of its kind in the world, thousands of tons of sand are sculptured by around 50 international sculptors working to a given theme. Sculptures may reach 15 metres in height. 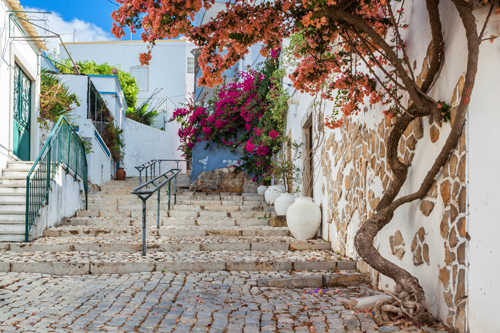 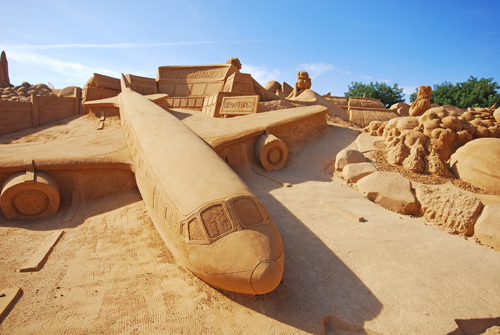 Summer in full swing: Festivals and Fairs for all tastes

The summer festival mood is set in Loule at the end of June with a party of music and fun in the historic part of the town. Over 40 live performances take place over four nights including a spectacular castle venue.
Quarteira’s Popular Saints festival (Marchas dos Santos Populares) shares the fiesta feeling with a procession along Avenida da Marginal (seaside avenue) in June/July with many participants representing local culture.

Any motorist will enjoy the Algarve Classic Cars event at the beginning of July,as they parade around the Vilamoura Marina and afterwards in Loule, Albufeira and Portimao.

In July Loule hosts not only the International Jazz Festival but the Fair of Hunting, Fishing and the Rural World. This fair takes place at the Algarve Stadium near Loule with a huge range of exhibitors covering hunting, fishing, agricultural machinery, boats, handicrafts etc and a display of dogs, live animals, horses and coaches. Local dishes including game, musical shows and sporting and cultural events make this a major event.
For the beer drinkers, Silves is the venue in early July for the International Beer Festival. Over ten days, beer, food, dancing and mayhem are to be had at the Fabrica do Ingles showground.

The Summer Fair of the Serra (Fierra da Serra) on the last weekend in July at Sao Bras de Alportel brings flavours, colours, smells and traditional art in a live show full of tradition. Handicrafts made before your eyes, traditional agricultural and livestock products and music and entertainment are the essence of this fair of the know-how of the ‘serra’.

August maintains the pace of festivities. The Rock One Music Festival in Portimao in early August brings bands to a string of concerts at the Parkalgar, the Algarve International Motor Park.
Portimao’s Sardine Festival for two weeks in mid August features open-fire sardine grilling at the riverfront, with modern fado, firework displays, music and dancing.

In August, the Algarve reflects on its history, exhibits its culture and demonstrates a leading role in the world of sport. The 7-day Medieval Fair at Silves in mid-August has processions, jousting, acrobats, snake charmers with artisans and merchants offering their wares.
The Medieval Days in Castro Marim over 4 days late in the month enjoys a similar theme and the town of Vila Real De Santo Antonio has traditional Arab markets, gastronomy and belly-dancing, snake charmers etc during the month

The Fatacil in Lagoa at the end of August is part contemporary agricultural show and part handicrafts with a music concert, trade exhibition of more than 800 exhibitors and regional gastronomy festivalwhich can be enjoyed in the area of ‘tarquinhas’, small eateries. There are fine examples of equestrianism and nightly performances by popular singers.
In August,some of the great names in the world of tennis come to Vale do Lobo to compete in the renowned Grand Champions tournament.

Entertainment and interest through the Autumn

Major attractions and events continue as days shorten and shadows lengthen. The National Folklore Festival in September, The Sweet PotatoFestival at Aljezur and the Festival in honour of Our Lady of Conception both in December show the best of life in the Algarve in an ambience of fun and enjoyment.

A wealth of information is available setting out details of events, timing and locations. The ‘Algarve News’ and ‘Central Algarve’ are free, widely available and give programmes over the following month or so.

Whatever your choice and wherever you go, the warm welcome, the fiesta ambiance and the fun and festivity guarantee enjoyment whilst giving an insight into the real culture of the Algarve. Take every opportunity!